Many of you will have seen this report in various forms around the country. Not only is it being published widely in newspapers but many of the local radio stations are making comment and getting comment from community members. It is important to discuss these issues with families and to challenge some of the questionable research findings. Advocacy for high quality ECE for all young children is critical. Keeping some of the real concerns visible e.g. the appalling legal ratio levels for babies in our country. No infant should be cared for by someone who is also caring for another 4 babies. A ratio of 1 teacher to 5 babies must be challenged!
Conservative lobby group Family First is using a report from a controversial academic to claim day care is detrimental to children.
The group issued today the report that claims spending long periods of time in day care, and away from parents, is detrimental to a child's long-term development.
However, the study, by Dr Aric Sigman, hit the headlines last year in Britain, where it was questioned by experts. Dr Sigman is also behind a 2009 claim that Facebook and other social networking sites cause cancer. He was accused of "cherry-picking" evidence and ignoring that which did not support this theory.
Writing in The Guardian last year, Dorothy Bishop, professor of developmental neuropsychology at Oxford, disputed his claims and questioned his credentials.
"Sigman ignores or selectively reports evidence for this more nuanced position," she wrote. "He justifies his one-sided approach to the evidence on the basis that "while open-mindedness has its place in academia, it is a luxury children can't afford".
Family First commissioned its report, Who Cares, to look at the increasing number of children and infants spending time in early childhood education while their parents are at work.
Advocates say staying at home with their children is a luxury that many parents can no longer afford.
Hayley Whitaker, early childhood spokeswoman for the NZEI union, said parental policies in New Zealand were "abhorrent" compared to other countries.
"We should be able to give people the choice to be at home with their children. They shouldn't have to feel that they're forced back into the workforce."
However, there was a lot of evidence to show high-quality early childhood education benefited children, she said.
"Everything in moderation, really."
That quality depended on having qualified teachers and better student teacher ratios.
In his report, Dr Sigman said the level of a stress hormone, cortisol, was increased in 70 to 80 per cent of children in centre-based care. The hormone is produced in response to fear and uncertainty and too much of it was linked to a lowered immune system, he said.
"Attending daycare for an extended time, whether small-scale and home-based, or large-scale and centre-based, that routinely triggers stress in young children could have potential long-term consequences for their mental and physical health as adults."
High-quality care did not override the effects, the report said.
"The degree of warmth and affection, particularly between mother and child, can curb a child's stress reactions and generally make a child more resilient to stressful and difficult situations later on."
Dr Sigman recommended fulltime parenting should be a child's right, that the status of fulltime mothers should be enhanced and the current 14 weeks' paid parental leave be extended considerably.
Child Poverty Action Group spokeswoman Susan St John said the problems in accessing day care were inflexibility and the high cost.
"It's like a contract and a commitment, which then gets parents trapped on to a treadmill, and at the end of the day they might be quite surprised when they do the sums to work out that actually they're not much further ahead."
None of that was concerned with what was best for the child, she said.
Labour social development spokeswoman Jacinda Ardern said financial constraints often forced parents back into work.


"Families need to be able to make the decisions around the care of these children that work best for them, but right now it's not a matter of choice for many of them."
Labour's policies of Working For Families tax credits and 20 hours' free early childhood education were not designed to push people into work but to allow families to make the best choice for them, she said.
"ECE is not about day care, it's about education at an appropriate length of time for our children."
Labour campaigned on extending paid parental leave to 26 weeks.
Plunket spokeswoman Nikki Hooper said people were increasingly aware of the importance of the early months in a child's life. The organisation advocates six months' parental leave.
'KIDS SHOW NO SIGN OF STRESS' 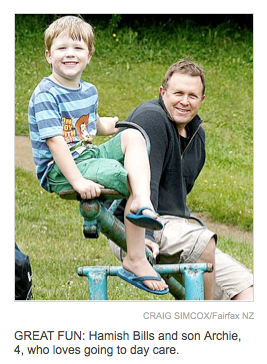 For 4-year-old Archie Bills, day care is so much fun he never wants to leave.
His mother, Sarah, said he was usually reluctant to leave Childspace in Wilton when she went to pick him up at the end of the day.
"He always tells me he loves his teachers," she said.
The Karori boy had not shown any signs of stress and was settled and happy.
"If we saw anything like that he would be out of child care."
Mrs Bills and her husband, Hamish, made sure they spent time together as a family in the weekends and took turns picking him up from the early learning centre.
Stay-at-home dad Tim Richards said the benefits of children in day care outweighed the negatives. He and his wife, Megan, chose to send their sons Jack, 9, and Sam, 3, to St Mary's Early Childhood Education Centre at a young age to help develop socialisation.
Jack, who started preschool at the age of 1, quickly adapted, while Sam, who went at 2, took a few months to adjust to the child care environment, he said.
Both boys flourished, with their speech skills improving quickly along with their social skills.
"I've never heard any parents who sent their kids there say that they're stressed."
Former Wellingtonian Haydn Jones and wife Zanta moved to Taranaki with their children Marley, 2, and Archer, 5 months, a year ago because they wanted to raise their children themselves. "I think it's a luxury to be able to raise our kids ourselves, which in itself is sad."
Posted by Wendy at 3:32 PM No comments:
Email ThisBlogThis!Share to TwitterShare to FacebookShare to Pinterest
Labels: Advocacy, Infants and toddlers, Media release, Newpaper article, Wendy Lee
Newer Posts Older Posts Home
Subscribe to: Posts (Atom)

Pages always worth a visit